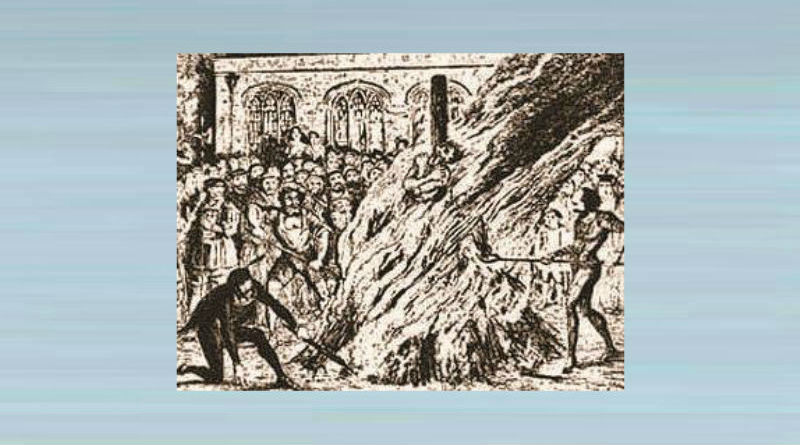 The last person in England so to die by being burnt alive was Edward Wightman in 1612.

Wightman was born in the English Midlands at Burbage, Leicestershire, in 1566. Early in his childhood the family moved to nearby Burton-on-Trent and this would be where Wightman would grow up.

At the time, this part of the English Midlands was a rebellious part of the country at the time. The local nobles were William Paget and his family -who had a history of of being Catholics.

They had previously supported the plot for Mary Queen of Scots to seize the throne from Elizabeth I and when that failed they fled, for a while, to France. Subsequently, without their influence, the area embraced Puritanism, as it sought to reform established English church from within.

Part Puritan, part Anabaptist and part radical , Wightman became a prominent figure in the local community. In 1596, he became interested in the case of the so-called Steepenhill Witch. A young girl called Alice Goodridge had been accused by a young boy named Thomas Darling of possessing him with the devil. Goodridge was arrested and jailed in Derby.

Wightman was one of five men that carried out a ‘Witches’ Examination’, seeking for signs of the devil in the young girl. Despite the case collapsing for lack of evidence, Wightman became both a recognised and well regarded preacher. But his preaching was rebellious as Wighman believed the Church of England was corrupt and therefore was corrupting society itself.

However, by 1601, his good standing was short lived for two reasons. Firstly, his business lost money and he entered into poverty and secondly he became a Soul Sleeper, Wightman began preaching that the soul does not leave the body upon death, but rather stays with the body until Judgment Day, at which point it either ascends to heaven or descends to hell – Extremely heretical at the time.

By a decade later, in April 1611, King James I had had enough of Wightman’s continued heresy and a warrant was issued for his arrest.

A Narration of the Burning of Edward Wightman gives an account of his trial and subsequent execution. Wightman was accused of eleven distinct heresies. Part of the charge was he believed that:

“The the baptizing of infants was an abominable custom; that the doctrine was a total fabrication and that Christ was only a mere man and not the son of God; that the Lord’s Supper and baptism were not to be celebrated; and that Christianity was not wholly professed and preached in the Church of England, but only in part.”

A Narration of the Burning of Edward Wightman, 1651

When the execution day arrived on March 20, 1612, Edward was tied to a post on the square in Litchfield next to Saint Mary’s church and the fire was lit under him. On feeling the heat, Wighman screamed out in recantation and he was pulled down, already badly burned.

A written retraction was hurriedly prepared and Wightman, in pain and weakness, orally agreed to retract as it was read to him. Later, however, no longer fearing the flames, he refused to sign the retraction and blasphemed louder than before.

King James I re-approved his execution and a few weeks later on April 11 1612, he was once more led to the stake. Once again, on feeling the intense heat of the fire, Wightman cried out in recantation again. But this time, the sheriff in charge of the execution commanded more faggots (bundles of thin sticks) to be thrown on to make the flames roar.

Edward was burned to ashes.

His death came just three weeks after the execution of Bartholomew Legate, a similar dissenter to Wightman. Legate’s martyrdom, by being burnt alive for heresy, influenced the emergence of the Seekers. As with Legate, Wightman’s death is the only historic image of him that exists.

A plaque was erected on the wall at nearby St Mary’s church to commemorate Wightman’s infamous place in English history.

Emma Goldman And The Philosophy of Anarchism 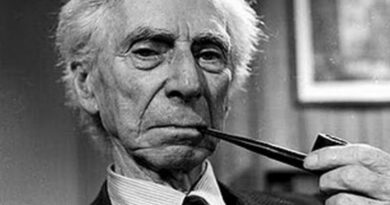 The Philosophy Of Bertrand Russell

"Only one man ever understood me, and he didn’t understand me." - G. W. F. Hegel