The James Parnell Plaque at Colchester Meeting House commemorates the first ever Quaker to die due to their non-conformist beliefs.

James Parnell (1636 – 1656) was born in Nottinghamshire, England, in 1636. During his formative years the country was in a state of great political and religious turmoil caused by the English Civil War Period. Numerous pamphlets promoting different theological ideas were circulating in the country. Dissenters risked persecution and imprisonment, with Parnell soon being one of them.

As a child, Parnell studied the scriptures and became an ardent seeker after spiritual truth. Finding no satisfaction from the priests in his town, like many others of his era, he left home to travel among the many religious sects that met secretly to avoid persecution. He encountered strong opposition from his local priests when, at the age of only 15, he set out to find in the north a ‘seeking people,’ with whom he had been corresponding.

A year later in 1653, a 16 year-old Parnell walked the 150 lonely and dangerous miles from Nottinghamshire to Carlisle to meet one such seeker, George Fox, who was at the time incarcerated in Carlisle jail. Little is known of their encounter, but Parnell came away fully committed to Fox and the emerging Quaker faith.

Parnell began travelling south, spreading the word to all who would listen. His direct challenge to the Established Church led to several clashes with the authorities.

By the summer of 1655, Parnell had reached northeast Essex, where he visited several towns. At Colchester, he spoke in St Nicholas Church – the first to preach the new Quaker faith in the town.  From there, he spent a week in discussion and argument before his arrest.

Parnell was arrested on Sunday, 4th July 1655, as he walked through Colchester after a church service. He was charged with blasphemy and other related offences. He was taken to the county jail in Colchester Castle.

At his trial the jury acquitted him of the charges, but the magistrate fined him £40 – a sum which Parnell refused to pay.

He was thus returned to prison where the gaoler (prison guard) was known for his cruel ways. Conditions in Parnell’s cell were terrible – it was a small hole in the castle wall, and the efforts of local Quakers to help him were barred. In prison, Parnell wrote, “I am committed to be kept a prisoner, but I am the Lord’s free-man.”

It is said that Parnell was forced to climb a rope in order to reach his food. After some months his health began to fail and his condition worsened after a fall from the rope when trying to get his food.

By the spring of 1656 he had become severely weakened and for ten days he could not eat. On the morning of 10th April, Parnell died.

The authorities attempted to cover-up the fall from the rope by claiming Parnell had died from a hunger strike, a decision the Quaker historian William Sewel calls, “A wicked lie”.

Parnell was buried in an unmarked grave in the grounds of Colchester Castle. A plaque commemorating his life has been placed in the cell where he died.

Whether Parnell ‘willingly’ died for his faith will always remain an unanswered question. However at the time, among the Society of Friends he quickly became known as the ‘Boy Maytr’.

Many in Colchester were converted due to Parnell’s preaching and the town later became a stronghold of Quakerism. Today, there is a street named after him in the town.

A room in Colchester Meeting House is named after James Parnell and the circular plaque with his image on it is fixed to the outer wall. 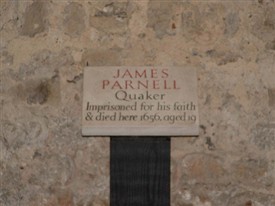 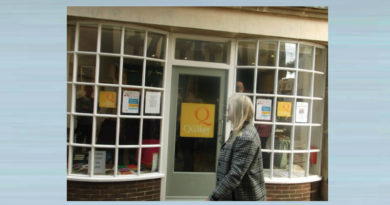 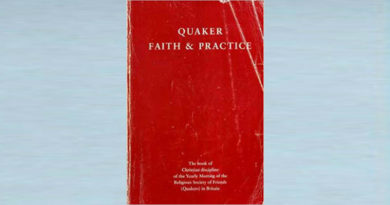 A Copy of Faith & Practice 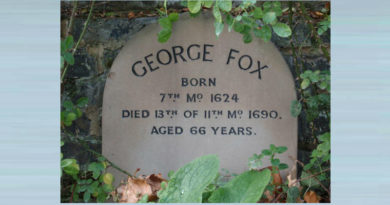 "So long as the memory of certain beloved friends lives in my heart, I shall say that life is good." - Helen Keller

Reflections of a New Young Quaker